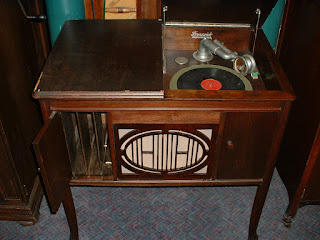 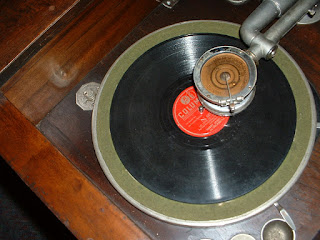 This is is a Brunswick Model R phonograph, serial number 227064 in a lowboy style cabinet, probably built in the early 1920s.

How Rare Is It?
Brunswick was moving into the number 2 spot in phonograph sales in the early 1920s, so there are probably a lot of these still in existence, though the lowboy style is less common.

How Does It Work?
The music is contained in the 78 rpm disc record.   For lateral cut records, the grooves move the needle on the reproducer sideways, which vibrates the diaphragm the needle is connected to, which reproduces the music stored in the disc.   From the diaphragm, the vibrating air is conducted through the tone arm to the back of the built in horn, which directs the sound to the front of the phonograph.   A major feature of this model is the 1917 patented Ultona tone arm, which incorporates a pickup for lateral groove records as produced by everyone except Edison and also a separate correct reproducer for the Edison vertical cut records.

The turntable is driven by a spring motor that you wind up with the side crank.   When fully wound, it will play 3 records before needing to be wound again.

Where Has It Been?
We have no information prior to 2015, when it was donated to the museum.   When it came to us it needed some work.   The front grille had been inserted upside down, which jammed it in place.   While removing it we further damaged it and the first order of restoration was it's restoration.   The Ultona reproducer was stuck in an in between position due to swelling of the pot metal and had to be freed.

Background Information
John Brunswick moved to America from Switzerland at the age of 14.   He started the Cincinnati  Carriage Company and expanded into wood products by 1845.   The company slogan was "If it's wood we can make it and make it better than anyone else".  They became a major player in the billiard and bowling areas.   They got into the phonograph business in the early 1910s by first building cabinets  for others, then by producing complete phonographs.   By 1920, they were moving into second place in this market, overtaking Columbia and still behind Victor.   Their ownership of their own cabinet making facility allowed them to be first in introducing the all electric phonograph in 1925.