If you are reading this blog you may not be confused, but we find that the difference between a Band Organ and a Calliope escapes many of our visitors.

Calliope was the ninth Greek muse presiding over beauty and elegance.   The word means beautiful voice, which may be a stretch for many instruments bearing this name.   Basically a Calliope is a bunch of whistles.   This instrument grew out of steam operated equipment, which had whistles used for a warning device,   Somebody listened to the whistle and figured if there were a bunch of tuned whistles, you could produce music with them.    From manually operated whistles, the move to a machine reading music from some source was a logical step. 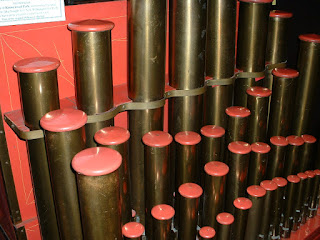 A Band Organ grew from a different ancestor.   The church organs from the Middle Ages were powered by air generated from a pump worked manually.   The pipes were mostly wood and with some modifications they could be voiced to give various tones.   By the mid 1800s, experiments were under way to add reeds to the wood pipes to mimic trumpets.   If you had enough different sounds available, it could sound like a band, thus the Band Organ was born.   They went under several names depending on their intended purpose.   Thus the large European Dance Organs intended for ballrooms.   When used at an amusement park with a kiddie ride or a carousel, they were usually called Band Organs.   Placed on the midway, they might be called a Fairground Organ. 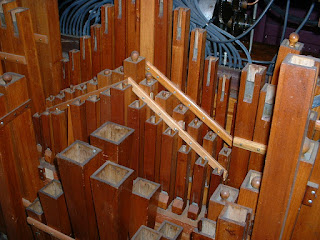 Posted by Unknown at 2:18 PM No comments:

Not What We Thought It Was

When the museum was opened in 1995, we had a lot of "Extra" items that came along, which were put in storage, mostly on the second and third floors.   When we started our "Open all Floors to the Public" project, we slowly cleaned out these areas and cataloged and stored the items more properly.

We had one phonograph listed on our inventory as a very early Columbia table model, which we had tucked away and paid no attention to. 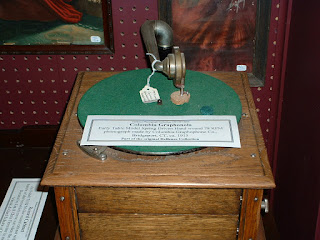 One of our summer interns was checking out these stored items for proper ID and condition.   It did not take long to see that this phonograph was not a Columbia, but an external horn 1906 Victor VicII, without a horn. 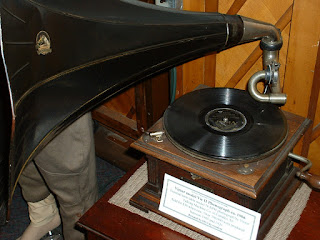 Once we understood what to look for, we found the horn in our miscellaneous stored parts.   After cleaning and repair, this phonograph became a fine addition to our first floor tour area and is played on many of our tours.

The Victor VicII was first introduced in 1901 as the E model.   Transition to the Vic-II name came in 1905 with the change to a tapered tone arm.   It was a single spring motor table model with an external horn, selling for $30.00 when introduced.   Production continued until 1920, by which time the price was $37.50 and something like 125,000 had been made.

Email ThisBlogThis!Share to TwitterShare to FacebookShare to Pinterest
Labels: phonograph

In the early 20th century, the phonograph was just coming into favor with the public and they were widely available in a price range of $25 to $200.

Victor thought that there was a market for an upscale version, so in 1915 the Victrola VV-XVIII was introduced at the selling price of $300.   The cabinet was slightly taller than the other Victor upright models, had curved sides and front, hand carved corners, fancy veneer and gold plated hardware. 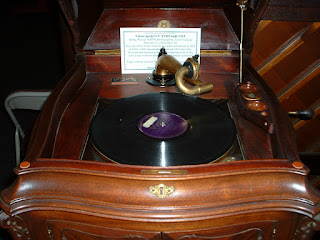 Beside the front doors that opened into the lower storage area, it had rear doors (leading basically to no place).   Techinically it was a good Victrola, but it was not a commercial success.   Sales were slow and costs were high.   By the end of 1916, production was discontinued after about 3400 of the spring motor version were produced and the remaining inventory was discounted to $250.

Our Victor VV-XVIII is not original, but was assembled from original parts.   The case was found at an antique shop in Ogunquit, Maine, where it had been stripped of its playing parts and turned into a dry bar.   The paper decal was dated J1, 1915.   The serial number plate was missing. 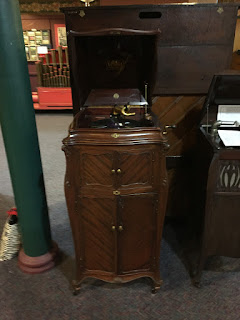 We bought it hoping to return it to original construction, but with no real plan to accomplish that job.   After some online hunting, we found a complete set of phonograph hardware in Plano, IL.   They came from a trashed cabinet but the serial number plate was missing.    The only remaining job was reconstructing the shelves in the storage area.   With the curve sides, it seems that the storage shelves were constructed and the case built around them.   We were thus forced to make the shelves in sections and assemble them inside the cabinet.   So we now have a mostly original somewhat restored Victor VV-XVIII with basically unknown provenance.

With thanks to Ron Haring the Victrola Man and www.victor-victrola.com 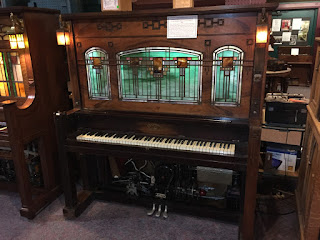 We have no information about the early life of this machine, but when Jake DeBence got it, the pipes, the air chest and the piano air chest were all missing.   The electric motor was missing.   The muffler rail was gone.  The good things were that the stained glass front was intact, the pump and roll drive were intact and the mandolin rail was still in place.  The modulating unit and the pressure reservoirs were also there.

Elizabeth started a search for a piano air chest and about 1970 Don Janisch provided a Cremona piano air chest from a model 10 or 20, which Jake adapted for this model G.   The air chest had more keys and more auxiliary valves than needed, so several functions were blocked off and not used in this application.   The modulating unit was bypassed.

A standard appliance motor (alleged to have been from a washing machine) was substituted for the missing motor and Jake had it playing.

When the museum obtained it with the rest of the collection in 1993, it was displayed and played as part of the main floor tours, until January of 2014, when it was moved to the second floor shop for work.   After posting questions on MMD, we gathered a lot of necessary information from many people about details of the work needed.   In June of 2014, The Laura Smedley Trust, administered by PNC, awarded a grant to pay for having a new set of pipes and the air chest made and we continued on the other work needed to bring it back to near original condition.

A new muffler rail was made.   The mandolin rail was repaired.   A correct motor was mounted and the pumps were rebuilt.   The piano air chest was reworked to provide attachment points for the pipe
pneumatics.   The modulating unit was rebuilt and put back on line.   The piano air chest tracker bar tubing connections were moved from the top to the bottom, out of the path of the new pipe connections for the pipe air chest pneumatics, so the fall board could be closed.   (When Jake adapted the piano stack, he just ran the hosed in front of and then over the top of the stack, which prevented the fall board from closing.)   The piano air chest valves were all checked and reset to proper clearance.   The piano action was repaired as needed.   In January 2015, Bruce Newman of Gold Beach, OR shipped us the new violin pipes and the air chest.   Installing them around a bigger than usual piano air chest was challenging, but accomplished.

In late March of 2015, everything was working and the machine was placed on our main floor to again become part of the tour.   It sounds great.   A complete article with photos was in the MBSI Journal for Sept/Oct of 2015.
Posted by Unknown at 6:00 AM No comments: