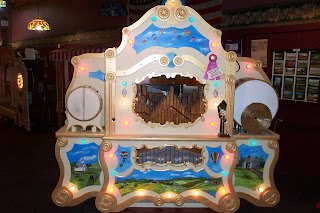 This is a Wurlizter Model 153 Duplex Orchestral Band Organ, built about 1919 by the Rudolph Wurlitzer Company in North Tonawanda, New York.   It is a 54 key organ, which plays 46 notes, actuates 6 stops and plays 2 drums and a cymbal.   It has 164 organ pipes. (Some keys play more than one pipe.)  It is equipped with a glockenspiel (the row of small bells on the lower front of the machine).   This model became the standard  by which Merry Go Round organs were judged.

How Rare Is It?

There were about 169 of this particular model built, the first one in 1916, with the last one in 1936.   We don't really know  how many are still in existence, but it must be a small number by now.   As far as we know there are only 3 of this model presently in use in public.   Wurlitzer made many other models of Band Organs and there are surviving  examples of most of them.   The DeBence Music Museum has one of each of three other models of Wurlitzer band organs.

How Does It Work?

The music is contained on a paper roll with holes punched in it, designated by Wurlizter as style 150, similar to a player piano roll.   The punched holes are "read" by a vacuum  control system that in turn opens valves allowing the compressed air to enter the selected pipes and play the music.   The vacuum and compressed air are supplied by wood and leather bellow pumps driven by a crankshaft, which is turned by the electric motor mounted on tope of the organ.   This model WURLITZER is equipped with two tracker frames which allow it to play continuously, since while one is rewinding the other plays.

What Is It Worth?   What Did it Cost?

Where Has It Been?

Built about 1919, its location is unknown until it was in use at Idora Park in Youngstown, OH.   Jake purchased it from Idora in the early 1980's.   At Idora it was played behind an ornate front façade, from the previous German organ, but Jake was not interested in the façade at their asking price, so he bought it less the façade, which was later destroyed in a fire.   Today, it plays behind a reproduced façade.   The center section is an original Wurlitzer part donated by a museum member.   The drum and top sections were built by us from photos of original units.

The Wurlitzer Company got its start in Cincinnati, OH in 1956 when Rudolph Wurlitzer, a German immigrant, started importing German musical instruments  for sale in the USA.   The Rudolph Wurlitzer Company was incorporated in 1890 and operated a manufacturing plant in Cincinnati.  In 1909, they bought the distressed deKleist firm in North Tonawanda, NY, which had been making mechanical music machines.   This factory became the Wurlitzer manufacturing center for their line of player pianos, orchestrions and band organs.
Posted by Unknown at 7:30 AM