Our Air-Calio, serial number 604, was built in 1927 in the Artizan Works in North Tonawanda,
New York.   This 46 note model was introduced as "The new Calliope with an Extra Punch.   Special  voicing  of pipes pitched  to play with band and lower bass tones than any other calliope made makes the instrument smooth, of pleasing tone and great volume without being offensive."   It started life on the midway at Kennywood Park in Pittsburgh, PA.   It is visible on page 144 of Jacques "Kennywood, Roller Coaster Capital of the World".   From there it joined the Larry Givens collection, where it was photographed for inclusion on page 844 of Bowers "Encyclopedia of Mechanical Music".   When that collection was broken up, it was then owned by Mr. Clark of Meadville, who used it in parades in the Sharon, PA area, until it failed. 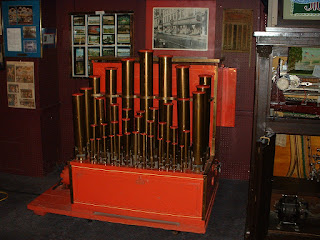 The tracker bar is scaled to play 65 note Wurlitzer Caliola or APP rolls once you reverse them side for side, but since Artizan used a pneumatic system for play (they called it rewind stop) rather than the Wurlizter mechanical system, you need to add the "play" holes in the roll as well as reversing it for use here.

When it came to us, it was missing the mechanical parts to stop and start the roll drive and the tapered speed control cone was split in two.   The keyboard allowing hand playing was defeated and the play & rewind buttons were disconnected.   All this and several other features have since been restored.

The accepted story is that only 3 of this model were built.   Only one other is now known, residing in Wisconsin.   It was badly damaged in a fire and has been rebuilt.   It has a set of bells mounted behind the pipes.
Posted by Unknown at 7:30 AM