ABOUT OUR WURLITZER MODEL 148 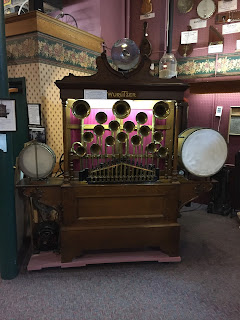 How Rare Is It?
There were 46 of this particular model built, the first one in 1916 and the last one in 1936.   We don't really know how many are still in existence, but it must be a pretty small number by now.   As far as we know, there is only 1 other of this model presently in use in public, at Gage Park in Topeka, Kansas.   Wurlitzer made many other models of Band Organs and there are surviving examples of most of them.   The DeBence Music Museum has one of each of three other models of Wurlitzer band organs.

How Does It Work?
The music is contained on a Wurlitzer style 150 paper roll, with holes punched in it, similar to a player piano roll.   The punched holes are "read" by a vacuum control system that in turn opens valves allowing compressed air to enter the selected pipes and play the music.   The vacuum and compressed air are supplied by wood and leather bellows pumps, driven by a crankshaft which is turned by the electric motor mounted beside the organ.   This model Wurlizter is equipped with two tracker frames which allows it to play continuously, since while one is rewinding the other plays.

Where Has It Been?
It was used in a skating rink in the Stoneboro/Sandy Lake area of Western PA until 1935.   When it quit working, it was allegedly replaced by an amplified phonograph, playing 78 RPM records of Ken Griffin at the Hammond Organ.   There is a problem with this story as the first Hammond was not available until 1935 and Ken Griffin was not recording yet.   Jake bought it and had it put back in playing condition.

Background Information
The Wurlitzer Company got its start in Cincinnati, OH in 1856 when Rudolph Wurlitzer, a German immigrant, started importing German musical instruments for sale in the USA.   The Rudolph Wurlitzer Company was incorporated in 1890 and operated a manufacturing plant in Cincinnati.   In 1909 they bought the distressed deKleist firm in North Tonawanda, NY, which had been making mechanical music machines.    This factory became the Wurlitzer manufacturing center for their line of player pianos, orchestrions and band organs.
Posted by Unknown at 7:30 AM