A quick try at playing it, showed that the bass section would play with a lot of pumping, indicating a good size leak.   The stops were hard to move and did not seem to change the sound.   The tremble section would not play at all.   The treble swell shade seemed to be disconnected.

Smith organs were assembled in the case, so you can't just unscrew the action and slide it out.   You have to disassemble layer by layer. 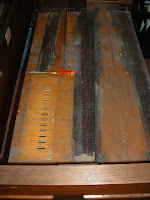 Once we got inside the air chest, a major leak became apparent.   Making the base out of several pieces of wood is common and the joints are normally sealed by gluing a piece of motor cloth over them.   In this case, the cloth had failed, leaving a 1/8 inch open slot. 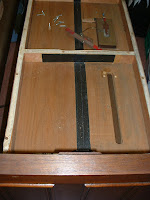 After taking the bottom half of the air chest out, it was possible to tape off the reservoir and check the pumps.   The pump and reservoir assembly had been rebuilt about 35 years ago.   They tested to still be in excellent condition.   We treated the cloth with preservative and it should be good for a long time.

We removed the remnants of the orginal air chest crack patch, cleaned off the old glue and glued on
a new patch. 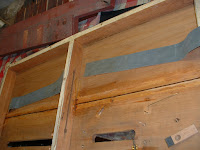