REPAIR OF THE LINK AX Part 6


In June of 2017, we moved it into the shop and started work.   Most of the detailed work is now finished and reassembly started.

You may remember that in our first check, we found the soft pedal system interfered with the repositioned drum and we left that problem for later.

The first problem we found was that both the on and off tracker holes were plugged.   That seemed an easy fix; but unplugging them fixed nothing.   So we started at the valves in the bottom leftside and traced hoses. 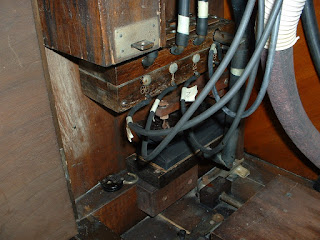 The #1 hose was plugged someplace, so we started tracing it.   The routing took it behind the valve area.   It was stuck and could not be moved.   Using the air compressor blew a hold someplace. 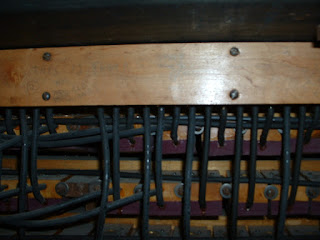 Pulling would not move it, so we decided to replace it.   Disconnecting from the tracker bar we followed it through the hose bundle on the right side of the case. 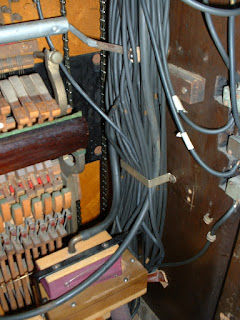 We replaced the line from the tracker bar to the valve.   A check showed all was well.   A later check showed it was still plugged, which meant the tracker bar had redeveloped a problem.    Attempts  to clean the nipple yielded more chaff, but also pierced the tracker tube.   We had to solder up the hole.   We then reconnected the tubing and all is well again. 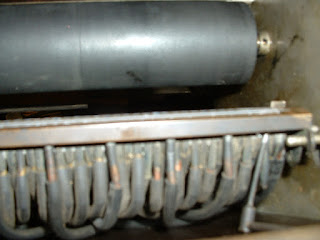 It took longer to do, than to tell the story.
Posted by Unknown at 7:30 AM