This is a Cremona style C Nickelodeon, serial number 17268, built in Chicago by the Marquette Piano Company about 1905.   Cremona is an Italian town famous for violin and other stringed instrument production.   Perhaps this is why Marquette used this name for their piano based instruments. 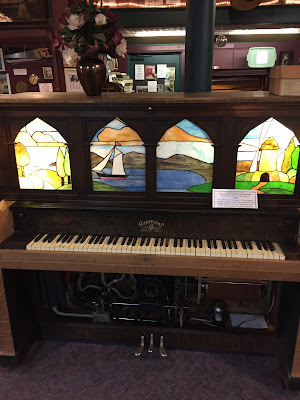 This was one of the earlier Cremona styles and was also sold by the Piano Player Mfg. Co. as Rhapsodist style B.   Thus quite a few may survive in collections today.

The music is contained on a paper roll with holes punched in it, designated as style A, which normally contains 10 songs.   The punched holes are "read" by a vacuum control system, which controls the piano and mandolin rail.    The vacuum is supplied by wood and leather bellows pumps driven by a crankshaft, which is turned by the electric motor mounted in the bottom of the instrument.   The roll drive is also located in this area and is a well designed system, more durable than many of the competitors.

We have no information prior to 2011, when this instrument was donated to us by Joan Hick, who donated it as the executrix of her brother Robert Sabo's estate.   Robert had started the restoration before he died and Joan wanted the work to be completed, with the instrument available to be viewed and played for the public.   The machine was delivered in many pieces and it was not until 2012 that Joan found the original stained glass and delivered it to us.   All the piano action parts beyond the 65 notes played by the A roll were missing and had to be reproduced from our "junk pile".    Most of the case had been stripped for refinishing, which we did not complete.   The carriage lamps were missing and a grant from one of our Board members paid for their reproduction.

We completed the necessary work and moved it to the first floor in 2013.


Background Information:
The Marquette Piano Co. started in Chicago building piano actions but about 1905 expanded to building complete instruments, thus becoming one of the first American firms in this industry.   Until 1907,  J. P. Seeburg worked for them until leaving to found his own company.

Sold under the Cremona name, their major production was between 1905 and 1920.   They built high quality machines with interior parts highly finished even though not visible, using a lot of mahogany for the wood parts.