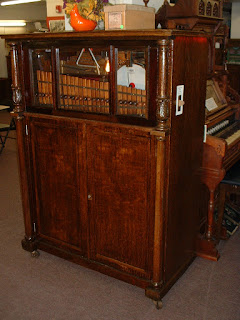 This is a Nelson-Wiggen style 4X orchestrion.   It could be set up to play either the 4X or G paper roll.  It differs from many contemporary designs using a single stroke marimba rather than a reiterating one.   The Nelson Wiggen machines were some of the most complex vacuum operated machines of the era and some of their critics said if there was a simple way to do something they would not even consider doing it that way.

This was one of the more popular instruments produced by Nelson-Wiggen, but how many have survived is unknown.

The music is contained on a paper roll with holes punched in it, which normally contains 10 songs.   The punched holes are "read" by a vacuum control system, that in turn opens valves allowing the compressed air to enter the selected pipes and play the music.   The vacuum and compressed air are suppled by wood and leather bellows pumps driven by a crankshaft, which is turned by the electric motor mounted in the bottom of the instrument.

Built about 1925, its location is unknown until it was owned by Jake, who got it in parts someplace in New York State and reassembled it.   It played for several years after it came to us, but got weaker as time went on.   We did some patch work to keep it playing, but by 2012 it needed serious work, so we did a fairly complete repair, including case refinishing.   In the process, we found Jake had bypassed several control function, which we restored to the original condition.

Oscar Nelson and Peder Wiggen, worked as engineers and factory supervisors for the J.P. Seeburg Company, until striking out on their own and forming the Nelson Wiggen Co. in Chicago in 1922.
Posted by Unknown at 7:30 AM