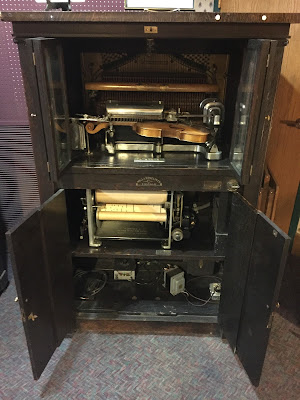 What Is It?
Mills Violano Virtuoso Home Model which plays a violin piano duet.   First available for sale in 1912.

How Rare Is It?
It is thought that there were about 4000 of the single violin versions made.

How Does It Work?
The music is contained on a paper roll with holes punched in it, similar to a player piano roll.   The punched holes are "read" by a unique electrical system, where thin wires "feel" for the holes and make electrical contact which energizes a solenoid, which performs a function of playing a note on the piano or violin.

Where Has It Been?
We have little factual verified information about this machine's history.   It is alleged that Jake bought it at a sheriff's sale after a house of ill repute was closed in Warren, Ohio.

Background Information
The Mills Novelty Company built a series of gambling machines in their Chicago  location.   The violin portion of this machines was first built as a stand alone device, which was to be accompanied by a piano player.   It became obvious that it would be more practical to include the piano in the machine and that was done.   They built machines with up to three violins incorporated.

One was present on the Titanic when it sank.

President Taft saw one in Chicago in 1911 and was so impressed he supported a joint resolution of Congress declaring it one of the 8 great inventions of the decade.

What Were the Eight Greatest Inventions in the 1900 to 1910 Decade as Voted by Congress?
In 1911 Mr. H. C. Armstrong, Principal Examiner of the US Patent Office, was authorized to compile a list of the eight most meritorious ideas of the previous decade.   His list, in no particular order was: