You may remember that since the Link arrived from Jake's barn in 1994, it has been used on the first floor as part of our guided tours.    Very little work had been done on it.   In June of 2017, we moved it into the shop and started work on it.   Most of the detailed work has now been finished and reassembly started.

When the tambourine was put in place, we discovered one reason it had been damaged.   The paper music shelf had sagged over time and was actually sitting on top of it.   The question was what to do about it. 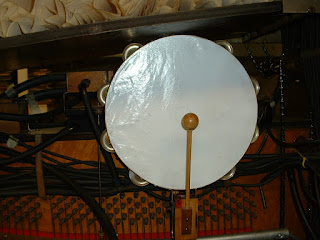 I decided to build a support on the tambourine mount to support the shelf high enough to clear the action.   It needed about 3/8 of an inch.

Having cleared that problem, it was time to put the back of the case on .   At some prior time, it looks like the cover had been flipped over and torn off the right corner of the back panel.   It had been glued back, but the alignment was off; with result being that the corner was too high.   The glued joint seemed solid, so we cut the corner down to match the rest of the top.

Probably as part of the incidence, some incorrect hinges were installed, ending up with 3 different sets for the 3 hinges involved.   We just took them off and will try to find a set of approximately original dimensions.   At least we will have them all the same.

The mandolin rail was discarded at some past time, so we will make a replacement.   The pneumatic controls are still in place, so all we need is the rail itself.   We have one which will be adapted; but more about that later.