Repair of the Link AX

Since the Link arrived from Jakes' barn in 1994, it has been used on the first floor of the museum, as part of our guided tours.   Very little work has been done on it, but it has become increasingly apparent that it could use a little maintenance.   The most obvious problem was that the xylophone did not turn off and on reliably.   Jake had added a booster pump, which seems to indicate there were some other problems.

In June 2017, we moved it into the shop and started work. 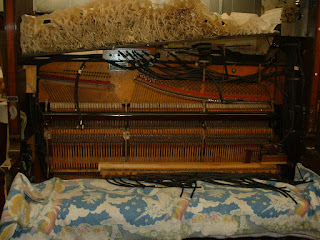 The drum assembly was in the way, so we took it out.   This let us see that the drum assembly had been moved to the left, which interfered with the soft pedal pneumatic.   This was immaterial, as the soft pedal control was unhooked.  Set that aside for later.   We could also see that while the control was in place, the mandolin rail was gone, another set aside.   The control for the stop and start of the xylophone was removed for repair. 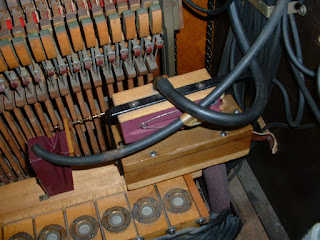 The vacuum valve was rebuilt; but was not in bad shape and should have worked, so the control for it was rebuilt.   Everything was then reinstalled. 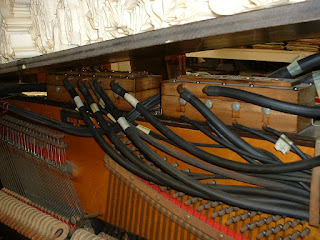 As this point nothing has been tried, so we do not know what the next issue may be.